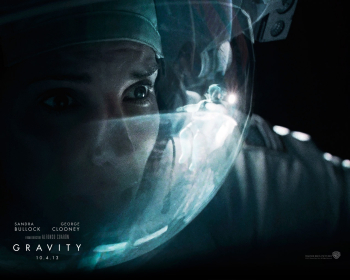 Hold your breath… Gravity is a fabulous ride of infinite, weightless space, made ethereally beautiful by Alfonso Cuarón’s moment-to-moment direction of Sandra Bullock’s flawless performance. Oh, and lest I forget to mention the adorable, spacesuit clad, George Clooney. He floats in and out of the story – with his star-power wattage dial turned up to high – in a small, but pivotal role, as the experienced astronaut and voice of reason.

The visuals are stunning. If you can see this film in its 3D version, do it. I am not a fan of 3D, but this is the best I’ve ever seen in terms of technical fluidity that adds value to the visual impact. The special effects never feel heavy handed, in fact, you might find yourself feeling as if you are floating alongside the shuttle.

The aesthetics combined with the audio – expertly contrasted with quiet moments – and edge of your seat pacing, all make for a full sensorial experience. There was a scene where I realized I was holding my breathe as Sandra Bullock’s character was gasping for air.

On the surface, the film is really good, but delve a little deeper and you will find many an issue seemlessly examined. Bullock’s character takes the audience on a wild and serene ride as she deals with islolation, loss, life, death, love, forgiveness, and rebirth. Questions of survival and risk take centerstage as she learns to accept “what is” and embrace the journey regardless of the outcome.

In this role, Bullock is physically and emotionally comfortable in her own skin. This confidence connects us to her in this movie with every small step of the way; that combined with a strong and sensitive female character makes this a giant step forward for women in film.

NOTE: I did not record a podcast on this film; written review only.

Get Our Free Newsletter!